After a long beta testing of 2 and a half years, On This February 4th of 2020, Nvidia Corporation has finally decided to launch their Cloud-Gaming Service code-name Nvidia GeForce NOW. Lets see what it does for you as a gamer, How is it same and difference from its other competitor : Google’s Stadia, How much does it cost and Is it worth your time ?

Is irritating that to play a game, Any game adequately one has to go through the rituals; Meeting System Requirements, Downloading the humongous game files, Updating them every second day And if you want to continue your session elsewhere, Its a nightmare.
Presenting Cloud Gaming : Brainchild of google, Now developed by almost every tech giant, Be it by Microsoft under the Xbox Umbrella, Alphabet Inc under codename Stadia and now Nvidia Corp. by the name of GeForce Now.
Now all your games Minimum System requirement has been set to just getting a quality Internet connection, And also continue your session on another PC, Mac, Unix, Android Tablet or Nvidia Shield Boxes !

Geforce Now : How Does It Work :

Nvidia has tied up with the largest game sellers and producers; Including Steam, Ubisoft, EA, Origin and others. Basically, You download the installer from here, Pair it with your Library, i.e Steam or UPlay, And whatever games you own, Will be available to launch at very high performance servers of Nvidia and you can stream PUBG, Fortnite, CSGO or Forza Horizon 4 on your 10 Year old PC, A android tablet or a Shield TV by downloading their respective clients.

GeForce Now on your system :

There are two membership options available at Nvidia Website : 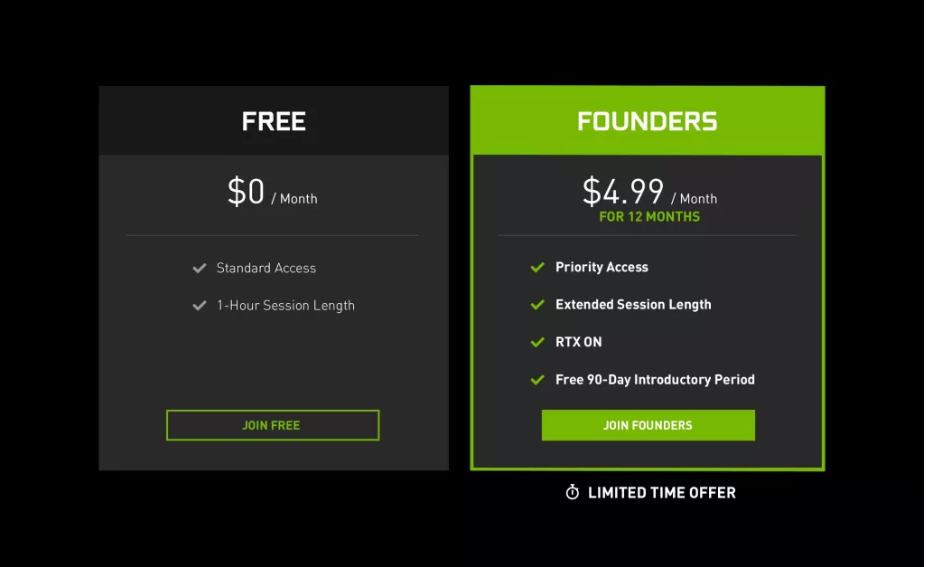 Founders Members get these benefits over Free members :

If you want to try it out, You can sign up for the free edition and start gaming. Its totally free and doesn’t even require a Credit Card for verification. Only specs it want is an Internet Connection of 30MB/s Or Above.

While Nvidia is very aggressive to push out NOW before Google’s Stadia, but it seems it has something very special, Nvidia NOW supports PC Titles, whereas Stadia requires the games to be ported in Unix.
On the note of availability, The company currently has 9 game-centers in North America, and 6 in Europe which it claims can reach 80 percent of broadband homes within 20 milliseconds. This speed, it claims, should be good enough for achieving 10ms round-trip latency with its partners in Tokyo, Seoul, and Moscow. Nvidia is also in talks with telecom giants such as AT&T and Verizon in expanding their network further. You can check their server count and status here : status.geforcenow.com

While inquired on what hardware will the servers be using, We get the most generic reply “Most Cutting edge processors with Nvidia RTX Graphics Card.” More information is yet to be disclosed.

While we applause Nvidia for this move, We also think its yet another service built ahead of time. GeForce Now is being developed with Full 5G Network in mind. If they could somehow compress their stream more efficiently, We believe GeForce Now can provide sustainable gaming for RPG’s such as Wither 3, But it terms of PvP like Counter Strike : Global Offensive, they still have a long way to go and lot of work to be done.

To be updated with all the latest news, articles and special announcements.

QUIZ : Which Dragon Ball Hero Are You ?

ABOUT US
Welcome to BabaHumor.com. Home of Science, Tech, E-Sports and Raspberry Pi Articles. Get authentic content curated by professionals and enthusiasts. Play some quizzes and read some articles. All Rights Reserved.
Contact us: [email protected]
FOLLOW US
© BabaHumor.com | Copyright 2015-2023 | All Rights Reserved Unless Specified. DCMA Protected.